Azim Rizvee, CEO, Co-Founder, and award-winning Broker of Record of MinMaxx Realty Inc. has been a proud citizen of Milton since 2004. Nominated as Milton’s first Federal Liberal candidate in 2015, Azim’s grassroots efforts resulted in a very close race with the incumbent. The vote margin was closed from over 24,000 in 2011 to just over 2000. Today, Azim remains passionate about building a better community for all families in his home riding.

He was born in Lahore, Pakistan and immigrated to Canada over 20 years ago. His passion for real estate began over 25 years ago when he first built a house back in Lahore. He says “building a dream home is the biggest asset anyone has. The dream of your own house or helping others build or achieve theirs is a key driver in my work.” He launched MinMaxx in 2006 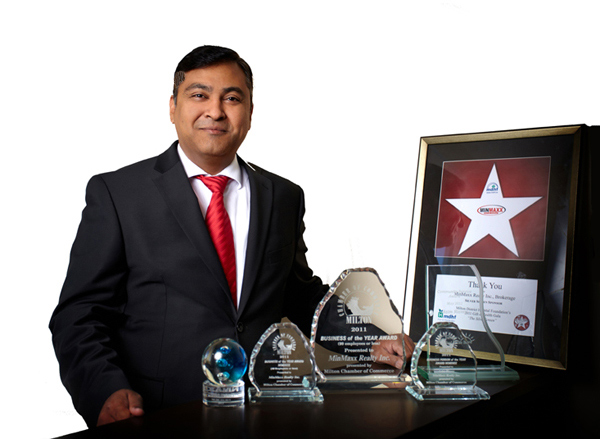 after a couple years formally working in the real estate industry. He was the Director of Operations at another real estate company and also held management roles in the corporate world. He has made MinMaxx Realty a top real estate company in Milton leading the MinMaxx Team to achieve over a $1.5 billion in real estate sales by selling over 2500 units in 12 years. He believes that clients should enjoy the real full service of a company and an entire team, since an individual one can only do so much. He says “MinMaxx has broken the myth that it’s all about branding, It‘s not. It‘s about service. At the end of the day, giving people value for their money and helping them find what they want has led to raving fans in our market.” Azim is no stranger to hard work and firmly believes in the Liberal leader RT Hon. Justin Trudeau’s statement that hard work pays off. Azim’s life philosophy is: actions always speak louder than words and once it comes to business and community service one should always think big, start small, and act fast. His track record speaks for itself once it comes to his mission of building communities, changing lives.

Under Azim’s leadership, MinMaxx Realty won the Milton Chamber of Commerce’s Business of the Year Award for 2011. Azim was nominated for Business Person of the Year. He has won the Real Estate Professional of the Year by World Wide Who’s Who as well as the most prestigious Community Service Award for 2012 by the Toronto Real Estate Board (TREB).

Azim says Canada is a great country full of honest, straight-forward, and up-front people. He has applied that honesty to his dealings in real estate. He says “people want the truth in the biggest transaction in their lives. They are happy with honest advice. That is what has made us successful.” He wants to extend those values in politics, saying it’s important to communicate well, give feedback, listen to people at the grassroots level, put ears to the ground, and above all, be honest, serving the needs of the constituents. “That is the only way democracy can prevail.”

Azim believes in giving back to his community that he says has given him so much. He served on the Board of Directors for the Milton District Hospital Foundation (MDHF) from 2012-2018. Azim worked hard to raise awareness of the hospital’s services and the much needed funds for expansion. MinMaxx has contributed at least a quarter of a million dollars towards different initiatives to benefit the Milton District Hospital in multiple ways.

He has sponsored “Put Your Heart in the Arts” Campaign to raise $2.2 million dollars whereby MinMaxx donated $150,000 for the naming rights of the MinMaxx Hall at the Milton Centre for the Arts. Azim also spearheaded MinMaxx’s involvement in the Milton Education Village Innovation Centre. MinMaxx is one of its six Founding Partners. Azim says this project supports the case for a Milton University. It is a partnership between the Town and Wilfred Laurier University that fosters a culture of entrepreneurship and business growth through post-secondary education and applied training. Under Azim’s guidance, MinMaxx has also raised funds for a Milton high school, and sponsored the Milton Cricket League, Street Hockey, Milton Transition Housing, the Skate Canada/Ontario Finals and many other community initiatives. Azim has also worked hard to help Milton’s Muslim community acquire land for a Mosque.

Azim firmly believes in a strong, rational and fair immigration system that supports the parents, spouses and other relatives of immigrants, and makes it easier to reunite families while at the same time reflects the desires and needs of the community.

Azim is also a proven winner in the corporate world, working for a number of multinational and national organizations, including Bell Canada and Aventis, in both management and directorial capacities. At Bell Canada, as a program manager of Interactive Television Services, he managed a team of 30 people and oversaw at least 20 resources.

Azim has Masters Degrees in Science and Business Administration with a major in Marketing. He also earned a Project Management Professional (PMP) designation from the Project Management Institute (PMI); and, he is an Alumnus of the Ivey Leadership Program from the Richard Ivey School of Business, one of the world’s top business schools. He is also a registered independent mortgage broker in Ontario and holds several prestigious industry designations, including: Accredited Mortgage Professional (AMP), Accredited Buyer’s Representative (ABR), Short Sales and Foreclosures Resource (SFR) Certification, Certified Negotiation Expert (CNE) and Certified Luxury Home Marketing Specialist, and Million Dollar Guild member of The Institute for Luxury Home Marketing.

Aside from providing superior real estate advice and services to clients at MinMaxx, his community engagements as well as his political aspirations, Azim enjoys spending time with his wife Dr. Rabiya and three children Zainab, Ali and Yousuf. His hobbies include tennis, cricket, chess, travel and poetry. He is also an avid book collector, an award-winning debater at inter-collegiate and regional levels and has won several national television quiz programs.

Did you find apk for android? You can find new Free Android Games and apps.